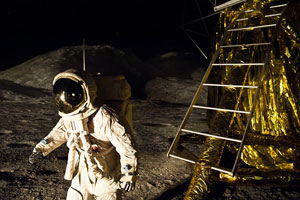 Neil Armstrong walked on the moon. His words are burned into the pages of history, “One small step for man, one giant leap for mankind!” It’s July 1969, only seven months since NASA’s made a bold decision to send Apollo 8 all the way to the moon on the first manned flight of the massive Saturn V rocket. So was it a giant leap for mankind? Eldon was surprised when he began interviewing people about this event to learn that most did not feel that it was such a big deal and many believed it was staged. Join Eldon and Bruce Tweedy for an inside look. 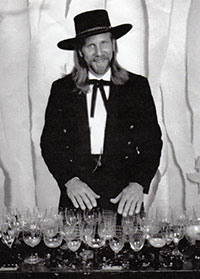 Bruce Tweedy became a fast draw artist at the age of 15—going on to become the fastest draw in the state of Minnesota and winning many competitions. It wasn’t until 1989 that Bruce began to explore the world of crystal music glasses when he was given his grandfather, Charles Wold’s, original crystal music glasses. It was on this set of unique and carefully selected glasses that Bruce learned to play waterless crystal glass music.

To learn more about Bruce Tweedy, go to www.brucetweedy.com