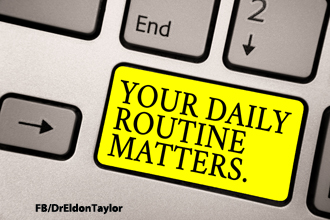 For this week’s spotlight, I chose to turn to habits. Not long ago I attended a CEU dedicated to understanding habits and addiction. The presenter shared a personal story about his own battle with weight control. From appearance sake alone, he could easily afford to lose over 100 pounds. He explained that there was a time when he was addicted to Krispy Kreme donuts. As he could eat two-dozen or more a day, he decided he could lose a lot of weight if he just gave up Krispy Kreme. This was working well for him until one day he had to travel to a different town. As he entered the freeway he remembered that just a few miles down the road there was an exit that dumped traffic off near a Krispy Kreme store. He began to talk to himself and his conversation went something like this:

1st Person: I’ve been good now for over a month, maybe I can stop and get just one or two donuts.
Talk-Back: You know one donut will never do.
1st Person: Well I’m going to need a cup of coffee this morning, so maybe I’ll just get a cup of coffee there.
Talk-Back: Oh sure, you’re only going to get coffee.
1st Person: I can be strong when I want to be. Look at how good I have been for over a month now. One donut is not going to hurt me.
Talk-Back: You know it’s never about one donut.
1st Person: Well given how much weight I have lost, I could eat a dozen and I’d deserve it—not that I would of course.

And so the inner chatter continued until he became aware that he had automatically exited the freeway and was pulling into the Krispy Kreme parking lot.

The fact is, approximately 90% of our habit behavior is decided at a subconscious level. The good old nucleus accumbens has made the decision before we act on it.

It’s long been recognized that neurons that fire together wire together and this creates patterns that are activated when we think about the pattern, whether it has to do with substance abuse or our self-appraised attitudes. Think about that for a moment, especially if there’s something you want to change in your life.

Many years ago now, when I initially began to tackle this problem, it became clear to me that the best way to interdict a pattern was to change the way we talked to ourselves, and to do so in such a manner that it would change our behavior. For example, the vast majority of overweight people drink little water, so what happens when you generate self-talk that states, “I like water. I drink lots of water. Water is good for me. I really love water. Water is my choice in drinks.” Obviously, if this is what you say to yourself, you begin to drink water. The more water you drink, the fuller you feel and the less likely you are to drink a soda or such. This action results in weight loss, and we have demonstrated this in independent studies using our InnerTalk weight loss program.

Changing the way you talk to yourself leads to changing your expectations, your perceptions, and consequently your behavior. I have cautioned for a long time against negative self-talk, but it’s even more important to begin to positively engineer your own inner talk according to the program you would like that subconscious of yours to play.

I wish you the best success in all things and appreciate your read and feedback.