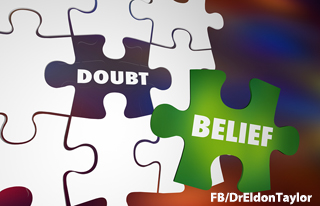 In this week’s spotlight I’d like to discuss doubt. There are very many religious leaders who instruct us that faith arises only when doubt exists. That is, there is no such thing as faith in things known—faith arises only from things unknown.

Still other religious leaders and spiritual teachers instruct us that doubt is the denial of faith. Doubt is to be vanquished and the word of God should replace it. Indeed, doubt is the work of the Deceiver for, as stated in Romans 14:23, “But he who doubts is condemned if he eats, because his eating is not from faith; and whatever is not from faith is sin.” Indeed, the Bible is full of quotes attacking doubt, as we see in
James 1:6-7, “But he must ask in faith without any doubting, for the one who doubts is like the surf of the sea, driven and tossed by the wind. For that man ought not to expect that he will receive anything from the Lord.”

Clifton Fadiman, editor of Britannica, is credited with saying, “And God plagued man with the ability to think.” Pause and think on that statement for a moment. It is when we think, when we evaluate claims critically, when we allow doubt instead of just accepting whatever we’re told to believe, that some would say we “sin.”

When I look around at the world and differentiate the various species inhabiting the known world, it becomes readily clear that humankind possesses something unique: the ability to think, to reason, to interpret information and forecast potential outcomes. Is Fadiman correct, are we plagued by this ability? Or, in the alternative, is it a gift?

Each of us must decide for ourselves whether or not thinking is a gift or a plague. Personally, I opt for the gift interpretation. This means that I regularly question everything from the statements by authorities regarding current matters to the philosophical arguments surrounding metaphysics, epistemology, and axiology. In my mind, not to do so is to ignore the gift that sets humankind apart and if, as also stated by so many spiritual teachers, we are created in the image of God, then unless the lizard is also in the image of God, it is our thinking intellectual abilities that distinguishes our image from the rest of the animal kingdom.

In my mind, doubt is essential for each of us to ever come to truly know anything. We are otherwise the blind being led by the blind, accepting a path that we can neither see nor understand.

For me, it has been reason that has led me to have faith. It is practical reasoning that has convinced me that faith is knowledge built from alternatives and shored up by pragmatic outcomes.

What are your thoughts on doubt?

As always, I welcome your thoughts and feedback.