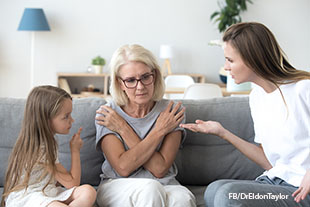 In this week’s spotlight, I wish to focus on a subject seldom discussed. If you’re an older member of our society, you probably never thought about blaming your parents for defective genes and you probably never considered demanding that your parents owed you everything because you never asked to be born. Many young people believe that the baby-boomers stole their future and ruined everything including the environment, and many adults argue that young people, Millennials, in particular, are Narcissists. These are but a few of the new demands made on us today. Why?

When my father had a stroke and my mother died of heart disease, it did not occur to me to blame them for passing on defective genes. That said, I recently heard a young person argue that they were not going to have children because they may have some defective genes like those that produce high cholesterol numbers.

I grew up knowing that I was on my own at age 18 and I actually left before then. My parents were not well-to-do, so it never occurred to me that they owed me a college education and all the perks that go with it such as food and housing. Indeed, when I turned twelve years old, my father took me aside and informed me that I was now old enough to pay room and board and buy my own schoolbooks and clothes. I took that as right-of-passage and I was honestly pleased about it. So, I got a job delivering newspapers and I bought and sold pigeons on the side to pay my way.

We have all heard those stories from our parents exaggerating how far they had to walk to school, and so forth. These stories set us all up, sooner or later, to be dismissed and ridiculed when we calibrate the old days with today. My own sons have often referred to my days as Jurassic Park times. So, when we ask questions, such as why young people today blame their parents for defective genes and the like, we’re likely to hear that the older generation was just not as informed as young people today. Is that true?

It is true that the genome had not been mapped but that does not mean that we were ignorant of genetically inherited characteristics (LOL). We were also sensitive to the environment and began putting emission standards and such in place. The fact is, my generation promoted women’s rights, protested racial inequities, sponsored improve social support such as Medicare, food stamps, and so forth. So why the disparity in our perspectives?

For what it’s worth, I think there is credit to be given to both sides of this discussion. Perhaps we raised our children in an effort to provide a better life than what we had experienced, and in that process we may have caved-in when we should not have, gifted our children with more than we should have, over-indulged them with praise in our attempts to help them feel good about themselves, and in other ways made it just too easy for them.

That said, in many ways we had it easier than they do. Many things including education were much more affordable for us, and the damage to the planet is undeniable despite any and all efforts we may have made. We took many things for granted and perhaps—just perhaps, we should have paid more attention to matters that would impact our children including their genetic inheritance. And I should add this: the avoidance of genetic matters is simply irresponsible.

As parents, we chose to have children. As such, we have the responsibility for all the ways we may have neglected the world they would inherit, as well as the quality of life that would be available to them.

I’m interested in what you think, so let me know. In the meantime, thank you for the read.