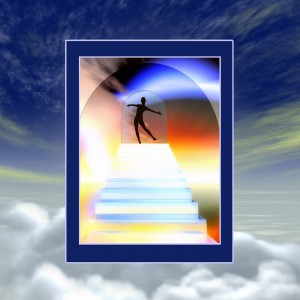 Every week I feature a spotlight on my radio show, Provocative Enlightenment. In our spotlight this week, we turn our attention to near death experiences–NDEs. We have hosted many experts on NDEs. Dr. Raymond Moody has been with us more than once, and he is the man who coined the term: NDE. For years Dr. Moody has offered evidence of life after death by way of his books and interviews. He has presented some truly incredible testimonials and offered some stories of patients, who during an “out of body experience,” or OBE, have accurately described the events that took place during a time of their clinical death.

However, during his last visit, Dr. Moody informed us that life after death was a philosophical issue, not a scientific enquiry. That is, science could not prove life after death nor could it disprove the matter, so any discussion on matters of this sort were therefore philosophical. Dr. John Lerma shared a story with us about a patient who died during surgery, only to come back and provide physical evidence of his out of body experience while he was allegedly dead. In this instance, the patient told Lerma of a silver coin resting high up on a piece of equipment and when Lerma stood on a chair and reached up, he found this coin covered by dust and well out of the sight line of anyone in the hospital.

Doctors John Turner, Craig Hogan, T. Lee Bauman, Julie Beischel, Stuart Hameroff, Jim Tucker, Ed Klein, and more all spoke to us about the surviving nature of consciousness–life after death. Others in health care and science offered additional evidence. We heard from Leo Kim, Annamaria Hemingway, Kim Sheridan, David Kessler, Michael Tymn, August Goforth, Diane Arcangel, and others including people like James VanPraagh and PMH Atwater. They all reported essentially the same sort of thing, love and light awaits us. Indeed, you can listen to these interviews all at this URL: https://parpromos.com/pp/it/11k/index.html

Now we did have some questionable information advanced, such as the notion that many NDE survivors came back with higher IQs (IQs over 200), and we did also host Dr. Kevin Nelson, author of “The Spiritual Doorway in the Brain: A Neurologist’s Search for the God Experience.” According to Nelson’s peer reviewed research, the dying brain produces events that are REM in nature. REM stands for rapid eye movement, something that occurs during dreams. However, Nelson did concede during the show that it’s possible that not all NDEs are indeed REM events.

Still, despite all of the above interviews and more, we were repeatedly informed of the light and love story. At first–darkness, then a tunnel leading to the light, then deceased loved ones, spirit guides, and even Christ met those experiencing an NDE. They are given a chance to return, or sometimes just told that it is not their time, and they return as changed people. This is the popular propaganda, for I have asked them all, what about negative experiences and repeatedly been told something like, “Very, very few if any.”

A quick search of the Internet reveals an abundance of rich NDE reports about everything from a Yemeni man who awoke in his grave to a dead toddler who reanimated at his own wake to ask for some water, then re-died. 1

This week I read about what is obviously a benchmark study in the field of NDE research. Reported from the University of Southampton in a journal article titled, “Near-death experiences? Results of the world’s largest medical study of the human mind and consciousness at the time of death,” we learned that “46 per cent experienced a broad range of mental recollections in relation to death that were not compatible with the commonly used term of NDE’s. These included fearful and persecutory experiences. Only 9 per cent had experiences compatible with NDEs.” 2

Now this was no small sample size. The study considered 2060 cardiac arrest cases from 15 hospitals. Known as the AWARE (AWAreness during REsusicitation) study, hospitals in the US, UK and Austria were included, thereby providing a broad cross section of subjects. The research was led by Dr. Sam Parnia of The State University of New York, at Stony Brook, also an honorary research fellow at the University of Southampton.

So what do we have? In my view, we either have a case for belief in the dark side as well as the LOVE side, or we are dealing with a phenomenon of the dying brain or both. For here’s the punch line, “only 9 percent [of the subjects] had experiences compatible with NDEs and only 2 per cent exhibited full awareness compatible with OBE’s.” 3

I do think there is life after death, but is that because I so want to? Am I cherry picking when I focus on a few stories that seem credible? After all, there are testimonial reports on everything from Elvis lives, to Big Foot kidnappings. Is there yet another explanation? What are your thoughts?