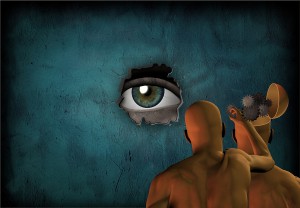 This past week an article caught my attention titled “This Strange Phenomenon Allows Scientists To Control People’s Daydreams.” The article, posted by Esther Inglis-Arkell, led with this paragraph, “Ever heard of the Perky Effect? It sounds cutesy-poo, but it’s an effect that has led to a decades-long investigation that reveals a startling truth. Even if you don’t consciously control your dreams, you probably think you control your daydreams. But that might not actually be true.”1

Wait, if we don’t consciously control what we daydream about, who does? Certainly those daydreams cannot be controlled by others, can they? The straight forward answer to that is yes!

What is the Perky Effect? Simply stated, it refers to the process by which visual mental imagery is thought to interfere with visual perception. For example, if a person is instructed to imagine seeing an apple or some other object on a white screen, to mentally project it, while a faint image of the apple or object is actually projected on the screen, the person is unable to distinguish the difference between the real projected image and the imagined one.

Now this neat little discover was made by Cheves W. Perky during her pioneering research in 1910. So how important is this finding and in what way can it be used to manage one’s daydreams?

There are actually two types of phenomena inherent to the Perky effect. The first is that reinforced by the visual aspect–for example, seeing an apple as a result of the faint projection and being totally convinced that the apple you are seeing is one you have mentally projected on the screen and not a technologically projected image. The second is the auditory aspect. Using white noise in the background, subjects are asked to imagine a tone. Of course the tone is added softly and once again, subjects are unable to distinguish the real tone from the imagined one.

Now here’s something else, this research has shown us that so long as you stay within certain boundaries, you can put an image or sound before a subject and they will not notice it, at least consciously, but they will nevertheless process it. The chosen stimulus can then be used as a prime, leading the subject to think, even daydream, about the stimulus. Quoting Esther Inglis-Arkell again:

“The right image can worm its way into a subject’s mind and change what they’re seeing. Granted, the orientation of a banana isn’t exactly Inception, but it is a way to control what people are thinking. The external world makes it into the world of the mind, without the mind ever realizing it.

One study showed that people will sometimes fold images into their reveries even when those images don’t fit with what they’re picturing. A psychologist tried asking people to picture the New York skyline. While they were thinking about it, she projected the faint image of a tomato on the screen in front of them. Many people saw the New York skyline at sunset. When we see something unusual in our daydreams, we make it work even if we don’t know we’re seeing it.” 2

I am so reminded of my books, Mind Programming and Choices and Illusions and the early subliminal work by Dr. O. Poetzle, who showed us that subliminal information was often incorporated into our dreams, and the work of Dr. W. R. Dunham and the use of whisper technology in his medical clinics to coach patients to wellness while they slept. Why shouldn’t I be–after all this sort of thing all comes under the label of subliminal information processing? 3

So here’s the deal. Imagine that we have a politician who like Bush and Obama, employs a team with the expertise to employ all the things, toys and technology, that we know can be used to manipulate the minds of many. Let’s say we have a conservative candidate running, and we could just as well do this for a liberal or for that matter, for a centrist or independent candidate. But for our little quickie scenario today, let’s use a conservative.

We’re going to put him or her out on the road in rallies everywhere we can, just as we saw done with Barack Obama. We’ll use some NLP. NLP can be a covert way in which one gains the trust and consent of another and was originally designed by Milton Erickson for therapeutic purposes. Conversational hypnosis merges the tools of NLP with hypnosis to induce an altered state in an audience (trance), to pace and lead, anchor and bypass, reprogram responses, accomplish an emotion transference, hide secondary meanings, and creating suggestions that work like post-hypnotic cues. Now we’ll train our candidate to give presentations with controlled factors in mind, such a their use of a particular word count per minute, their tone and inflection, their hand engagement, the elevated podium that tips the head of the audience slightly upward, often leading to eye flutter and even closure, and so forth.

Now we’ll carefully choose the background setting and we’ll use wherever possible a large white screen to move pictures of our candidate, his family, the American flag, the scales of justice, and so forth, all the while we will use a candle watt difference to simultaneously employ subliminal content. We’ll use images of our candidate being sworn in and crowds cheering his election that will be timed with statements such as, “When I’m President I will reduce government spending abroad and bring that money home to you.”

Now as a conservative candidate who wishes to sway moderates and even some liberals, we’ll use primes wherever and whenever we can. Primes proven to unconsciously persuade liberals to move in the direction of a more conservative attitude, so instead of water on the table near our candidate, we’ll have a jar of hand sanitizer and so forth.

You get the picture by now. This sort of political savvy goes on today. The Perky effect together with all of the other tools and toys available today to surreptitiously manipulate you have been developed as the result of years and years of research, and billions and billions of dollars, dedicated to just this purpose. Now, just how consciously do you think your last major decision was? What’s more, we know from our compliance principles that once you make a decision, you will defend and defend it again and again, as though to recognize a mistake was unforgivable. That’s the final hook–because you’ll refuse to let go!

It would seem that our minds are no longer so private. Indeed, perhaps they are better understood by others than by ourselves.