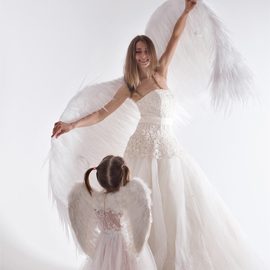 In today’s spotlight, I would like to discuss magic. Not the magic of Harry Houdini or David Copperfield, but the magic found in fairies, angels, and other otherworldly figures. According to an article by Jerry Coyne. “A new Associated Press poll, manages to unwittingly combine two superstitions: belief in Santa and belief in angels. It’s a very strange poll, but here are the salient results: Only 84% of children ever believed in Santa. 16% didn’t. 16% of Santa atheists is a number much higher than the proportion of God atheists! The mean age at which kids stopped believing in Santa was 8.8 years. 37% of Americans think that the Santa tradition enhances the religious aspect of Christmas, while 48% say it detracts. 77% of Americans believe in angels.” 1

There is more—much more. “A 2001 Gallup Poll found that the general public embraced the following: 54% of people believed in psychic/spiritual healing, 42% believed in haunted houses, 41% believed in satanic possession, 36% in telepathy, 25% in reincarnation, and 15% in channeling. A survey by Jeffrey S. Levin, associate professor at Eastern Virginia Medical School, Norfolk found that over 2/3 of the U.S. population reported having at least one mystical experience.”2

According to an article in the Scathing Atheist, 90% of Americans believe in space fairies. Quoting the article, “In a recent Gallup Poll, more than 90% of Americans still believe in god despite the fact that in the same survey, 100% of them had no evidence upon which to base this asinine assumption.”3

Is it really an asinine assumption to believe in a Creator? Is it folly to believe in Guides, Archangels, and so forth? What sort of evidence would the scathing atheist find tenable, as an acceptable reason for why folks believe in God? I mean, there are very many people who have what is commonly referred to among the religious as testimonials to their faith. However, I suspect that any subjective experience would fail the criteria by which our atheist pack would judge its merits.

The famous atheist, Anthony Flew, changed his mind before leaving this incarnate state. His last book titled, There Is a God: How the World’s Most Notorious Atheist Changed His Mind, was met with criticisms by many of his former would-be faithful followers. Among the challenges thrown at Flew was the notion that he only did this for money. As such, you could dismiss his work for after-all; it was not what he truly believed.

What a loop. This axiom is false. If the axiom is indeed proven to be false, then it is also true, for the axiom is indeed false. The circularity of such an inconsistent position as that taken by the so-called scathing atheist with respect to denying the validity of a subjective experience, while using the same to defeat any subjective argument, is truly remarkably ignorant.

Douglas Hofstadter has shown rather elegantly that subjectivity is essentially all we ever have. We are self-referential by nature. Every notion we hold as true or false arises within our own private sense of self. We think of ourselves as having an “I” quality, and so refer to ourselves as “me.” The “me” believes as I do based on many different factors including my own personal interpretation of what real “meaning” is. Further, real meaning for most has a certain economy to it—what do I gain from this? Think for a moment about yourself—what do you believe and what do you gain by believing it?

The pragmatist in me finds value in believing in many things described as supernatural. Dr. Ralph Lewis, author of Finding Purpose in a Godless World, and an outspoken atheist, told me that when he is dealing with a seriously ill patient who believes in God, he sustains their belief because it has value to them. Value that sometimes seems to lead to some rather mysterious and/or miraculous healings.