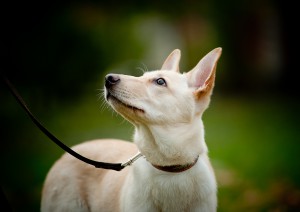 I recently posted a new study on FB that announced, “Dogs hear our words and how we say them.” The article summarized its findings this way: “When people hear another person talking to them, they respond not only to what is being said — those consonants and vowels strung together into words and sentences — but also to other features of that speech — the emotional tone and the speaker’s gender, for instance. Now, a report provides some of the first evidence of how dogs also differentiate and process those various components of human speech.”

The study design evaluated how dogs processed information. Previous research has shown that dogs process information hemispherically. Lead researcher, Victoria Ratcliffe of the School of Psychology at the University of Sussex, explained the findings this way, “This is particularly interesting because our results suggest that the processing of speech components in the dog’s brain is divided between the two hemispheres in a way that is actually very similar to the way it is separated in the human brain. Of course, it doesn’t mean that dogs actually understand everything that we humans might say or that they have a human-like ability of language–far from it. But these results support the idea that our canine companions are paying attention not only to who we are and how we say things, but also to what we say. All of this should come as good news to many of us dog-loving humans, as we spend considerable time talking to our respective pups already. They might not always understand you, but they really are listening.” 1

Animal Vocabulary
Dogs are not the only ones who appear to understand language and it’s not limited to understanding human language, as many animals also possess their own language. Prairie dogs have their own vocabulary and even distinguish between the approach of a female or male human, what color clothing they’re wearing, and whether or not they are carrying a gun. Dolphins are known to have a very large and complex vocabulary and some animals are able to learn human language. For example, the late African Gray parrot, Alex, not only learned human language, he consistently provided the correct answer to questions using human language. 2

Moral Animals
Animals are capable of moral decisions as well. Experiments with macaque monkeys, Bonobos, and other animals have repeatedly demonstrated this. Indeed, Dr. Frans de Waal explained his work on my radio show, Provocative Enlightenment, this research demonstrates that moral behavior does not begin and end with religion but is in fact a product of evolution and as such, a behavior found among many animals. 3

In one study carried out by Drs. Sagan and Druyan, we learn the following as quoted from their book, Shadows of Forgotten Ancestors, “In the annals of primate ethics, there are some accounts that have the ring of parable. In a laboratory setting, macaques were fed if they were willing to pull a chain and electrically shock an unrelated macaque whose agony was in plain view through a one-way mirror. Otherwise, they starved. After learning the ropes, the monkeys frequently refused to pull the chain; in one experiment only 13% would do so – 87% preferred to go hungry. One macaque went without food for nearly two weeks rather than hurt its fellow. Macaques who had themselves been shocked in previous experiments were even less willing to pull the chain. The relative social status or gender of the macaques had little bearing on their reluctance to hurt others.” 4

For that matter, animals understand the concept of social contracts, possess the ability to use tools, are self-aware, and even understand the notion of death. Elephants who stop when encountering the skeleton of friends and appear to mourn evidence this last one.  5

Two Stories
I personally know that animals understand human language. I have had the great pleasure of enjoying very special relationships with horses, dogs, cats, goats, parrots, and even a bull calf. I could share many stories with you, but let me tell you about just a couple. We had a raccoon come in and begin killing our chickens. One morning my German Shepherd, Balto, began barking at the back patio door while I was sipping my first cup of coffee. I went to the glass patio door and there I saw the largest coon I have ever seen. I quickly grabbed my shotgun and opened the door, where upon Balto rushed out to grab the coon. The coon weighed some 45 pounds and instead of running turned to face Balto. Gripping the balcony railing, it stood its ground striking out at Balto with its inch and half claws. Balto was blocking my shot so I yelled the command ‘brake away’ out of instinct, and Balto did just that, providing the shot that removed the coon and ended the chicken kills. This was a command that I had never used before anywhere with any animal. How do you think Balto understood what to do?

Recently my pretty bride informed me that a skunk had taken up residency in her chicken house. Skunks are notorious egg raiders and they kill any chicken that gets in their way. I looked in her chicken house and sure enough, there in one of the nesting boxes was a large skunk. So I decided to try to get it to leave by throwing some mothballs into the coop as close to the skunk as possible. I then closed the chicken house door and waited for it to leave. A couple of hours later and the skunk had not moved. So this time I reluctantly informed the skunk that I did not want to have to kill it, but if it did not leave I was going to have to shoot it. I well remember feeling very sad about needing to kill this beautiful animal and I do believe that the skunk understood me. I then went to the house to get a gun since it was getting dark and time was running out. Obviously, the chickens were not going in for the night, instead they were nervously hanging around the chicken house. We have predators a plenty around our ranch, so allowing them to stay out during the evening wasn’t an option. It took less than five minute to load my weapon and return to the chicken house, where I found the skunk had exited. Coincidence, I think not but you can decide.

2 Staff (2014). “Don’t only humans have the ability to use language and understand abstract concepts?” 2014, https://ar.vegnews.org/language.html.