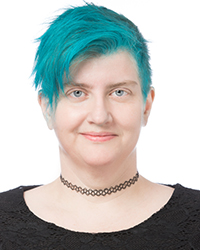 We live in the age of the algorithm. Increasingly, the decisions that affect our lives—where we go to school, whether we can get a job or a loan, how much we pay for health insurance—are being made not by humans, but by machines. In theory, this should lead to greater fairness: Everyone is judged according to the same rules.

But as mathematician and data scientist Cathy O’Neil reveals, the mathematical models being used today are unregulated and uncontestable, even when they’re wrong. Most troubling, they reinforce discrimination—propping up the lucky, punishing the downtrodden, and undermining our democracy in the process. Welcome to the dark side of Big Data.

Cathy O’Neil earned a Ph.D. in math from Harvard, was a postdoc at the MIT math department, and a professor at Barnard College where she published a number of research papers in arithmetic algebraic geometry. She then switched over to the private sector, working as a quant for the hedge fund D.E. Shaw in the middle of the credit crisis, and then for RiskMetrics, a risk software company that assesses risk for the holdings of hedge funds and banks. She left finance in 2011 and started working as a data scientist in the New York start-up scene, building models that predicted people’s purchases and clicks. She wrote Doing Data Science in 2013 and launched the Lede Program in Data Journalism at Columbia in 2014. She is a regular contributor to Bloomberg View and wrote the book Weapons of Math Destruction: how big data increases inequality and threatens democracy. She recently founded ORCAA, an algorithmic auditing company.

To learn more about Cathy O’Neil and her work, go to mathbabe.org and weaponsofmathdestructionbook.com