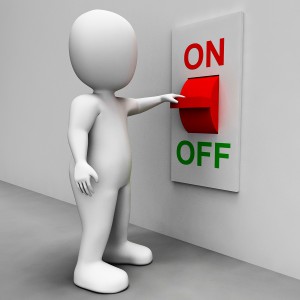 We are all familiar with simple toggle switches that turn things on and off. From our household light switches to those small slide buttons on the bottom of children’s toys, we learn not just what a switch is, but how to use it—and we do so very early in life. Switches are so common that we take them for granted. We have small switches and large ones, and we turn off and on single light bulbs and entire electrical grids. So what’s the deal about on-off switches?

There are many things we have come to take for granted. Among them is human consciousness. We can easily imagine, thanks in large to our entertainment industry, turning a robot on and off. We can even imagine shutting down the Terminator with some remote switch that halts him immediately in mid-stride. But how about shutting down a human in the same way?

This month we learned that science has discovered the on-off switch for human consciousness. One moment you’re conscious and the next—well the switch was pulled and you’re not. It appears that a single area in the brain, the claustrum, may orchestrate consciousness.

Now, at least for the moment, the switch is only accessed by zapping the claustrum with electricity. For this, you must at least be connected to some electrical apparatus for it to succeed. As such, there is some comfort in knowing this cannot be done without your awareness. However, notice that I began this paragraph with a “for the moment’ caveat.

There is a great deal of research today in the area of remote brain control. For example, monkey brains and their subsequent behavior have been controlled with blue light. In 2012 researchers reported successfully using optogenetics to alter monkey behavior. Now “optogenetics is the combination of genetics and optics to control well-defined events within specific cells of living tissue. It includes the discovery and insertion into cells of genes that confer light responsiveness; it also includes the associated technologies for delivering light deep into organisms as complex as freely moving mammals, for targeting light-sensitivity to cells of interest, and for assessing specific readouts, or effects, of this optical control.” (https://optogenetics.weebly.com/what-is-it.html)

So a technology, something perhaps like optogenetics, may one day facilitate the shut down of consciousness—that of an individual or a group. This is worth thinking about despite its Orwellian overtones. I for one can easily imagine researching the development of this sort of remote control technology under the guise of protection and national security. After all, with this capability you could shut down criminals, terrorists, and more—thereby minimizing security risks to all. Why you could shut down an entire mob at once, freezing them in their tracks. And hey, if you’re one of those zombie apocalypse followers, what a perfect weapon. You could shut down an entire zombie pack in a single light flash.

Well, science moves on, and where it goes is often both exciting and fearful. Let me leave you with a quote from the article, “Consciousness on-off switch discovered deep in brain,” published by New Scientist, “When the team zapped the area with high frequency electrical impulses, the woman lost consciousness. She stopped reading and stared blankly into space, she didn’t respond to auditory or visual commands and her breathing slowed. As soon as the stimulation stopped, she immediately regained consciousness with no memory of the event. The same thing happened every time the area was stimulated during two days of experiments.” (https://www.newscientist.com/article/mg22329762.700-consciousness-onoff-switch-discovered-deep-in-brain.html)

Ponder that one and thanks for the read,