To Take or to Give 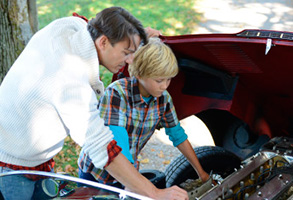 There seems to be a lot of conversation these days about the so-called “entitled ones.” Indeed, like a label designed to besmirch certain groups or ideas, “entitlement” is used to demean many social welfare programs just as “Tea Party” is used to belittle and categorize certain conservatives Part of my research involves evaluating positioning methods used to frame arguments and people and I have therefore invested a great deal of thought on labels. Recently, I had an experience that gave rise to a realization. Let me flesh that out some.

A few days ago, I was treated for a rotator cuff injury by a physical therapist. She was quite competent and we chatted while she moved my arm and shoulder from place to place. I would estimate her to be in her mid- to late-thirties. We happened to take up the subject of children, and when it came to my youngest son, William, who is almost 15 and a straight-A student, I told her about a new venture the two of us had embarked upon.

William is passionate about older cars, particularly the mid- to late-’60’s Impalas. He is a fan of the TV series Supernatural, and the heroes of this show, Sam and Dean Winchester, drive a 1966 Chevrolet Impala. Now his older brother had absolutely no interest in cars, so I was more than ready to indulge William’s fantasy and use the restoration project of a collector car as one of our bonding opportunities. As such, we went to work finding the right car.

Now, the deal from the get-go went like this: We would find the car of his dreams, restore it together and, so long as he really applied himself to learning all there was to know about the car and to doing as much work as we could together on it, the car would be his upon graduating from graduate school. Obviously, this implied a multiple-year restoration process, perhaps 10 years in all. There would be benefits, however, to all of his work prior to his graduation. He would have the opportunity to drive the car on special occasions, such as taking it to the prom.

After a few months of searching we found the car, a 1969 Impala Super Sport convertible. The car was in Texas, so we arranged shipping to Washington state and when it arrived, we drove it all of about 100 yards and the left front wheel fell off. The adventure was under way!

Now, back to the point of this article. I shared with my physical therapist this much of the story when she interrupted to inform me that in her family, the children all had to earn the money to buy their own car. I must admit to feeling challenged — why would I buy a 15-year-old the car of his dreams? That’s a fair question.

I didn’t exactly give the matter the thought it deserved at the moment. Instead, I responded from my heart. I informed her that when I was 12 years old, my father took me aside and told me that I was now old enough to support myself, to carry my own weight. He would expect me to pay room and board, buy my own books and pay my own tuitions. He shared his story with me. When he was 12, his father had died and he had to get a job to support his mother and older sister. He started his working life by carrying sacks of flour from the mill to the railroad yard in St. Anthony, Idaho until he was old enough to become a lumberjack. He did this until WWII came along ,when he joined the army. However, he did assure me that I would at least have the cushion of knowing he was there if I needed help.

I was actually excited about this and felt rewarded — I was being treated like a man. I went to work. I got a paper route that I worked year-round and as time passed, I built the route up by adding customers and acquiring neighboring routes. Every morning at 5 a.m., I was up and out picking up papers on my bicycle. When the summer school break arrived, I went to work for a local farmer, in the fields and the silage pits. As I grew older, I found higher paying jobs in grocery stores, service stations and salvage yards. Then the day came that my father and I had a major quarrel — I don’t even remember what it was about, but I stood my ground and threatened to leave home. I will never forget his words, for they kept me from going back. MY Dad said, “Go ahead if you think you’re man enough, but you’ll come running back with your tail between your legs!”

I looked squarely in the eyes of my physical therapist and said, “And I don’t want that for my sons!” You might say that ended our conversation.

In the beginning of this story, I suggested that I had experienced a realization. Well, here it is. Most people in every generation try to make things easier for their children than they had it. In doing so, however, we may not actually be doing them any favors. I see young people today who expect to have everything their parents have the minute they leave home. More and more, young people believe things should just be free. “Why not use a torrent to obtain an illegal copy of a movie or a soundtrack or some game, after all, the businesses that make these products are ripping everyone off and that’s why they’re filthy rich,” is a common sentiment among teenagers today. As if being successful was a crime.

More and more young people also believe college and healthcare should be free and the freebies don’t stop there. The problem is simple, nothing is free and we all know it. Someone pays somewhere but given this trend, fewer and fewer folks will be willing to shoulder the costs. So, who ultimately is responsible both for this prevailing attitude among some and for creating it in the first place?

There’s my realization. I have worked hard all of my life — now for over 55 years. By most standards, I am successful. I want my children to enjoy the fruits of my labors, but there is a point where in so doing, I may be contributing to the idea that everything should be free. They are, after all, entitled.

Now, I don’t mean entitled in the same sense that we, as a society, have an obligation to care for the sick and needy. That is a burden that we all should and do share. No — I mean entitled in the sense that if some get it for free, then all should receive the same benefit at the same cost. There is quite a difference between my two sons and the less advantaged people in the world, and I’m sure that goes for many of us. My realization: I want to teach my sons to contribute to the support of the disadvantaged, the needy and the sick. That means I want them to earn their way through life. I want them to give to society instead of take. Now, balancing my desire to make things better for them while teaching them both a good work ethic and self-responsibility — well, that is my challenge. I tend to think that it is all of ours for we cannot afford the path we are on — my thoughts anyway.

Thanks for the read,