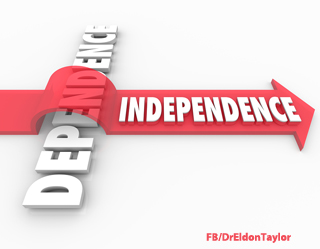 In this week’s spotlight I want to discuss the idea of self-sufficiency. When I was much younger, I read Emerson’s essay on Self-Reliance. I was so impressed that I later purchased a large book titled The Universal Self-Instructor. Emerson’s message had three real take-aways for me:  1. Self-responsibility; 2. Self-ability; and 3. Follow your individual will instead of conforming to social expectations.

In the past I have written a lot about self-responsibility and resisting conforming for purposes of fitting in, so today I’ll focus on the idea of self-ability. What is self-ability and is it possible in today’s world?

When I was a young man it seemed to me that I needed to be able to take care of myself and my family in the direst situations. As such I learned basic carpentry, electrical, building codes, auto mechanics, metal work, sheet rocking, painting, and so forth. Years later the computer world changed everything so I raced to learn and keep up with the skill set necessary to utilize this technology. However, I must admit that the field raced on so rapidly that today I still feel like a neophyte just beginning to explore the technology despite using it everyday in my business and home for a variety of things ranging from robotics to social networking. So my question, is it practical in today’s world to attempt to become somewhat self-enabled according to my definition of self-ability?

I remember leaving my car with a car dealership in Las Vegas. When I went to pick it up the mechanic told I that I needed to replace the vacuum leader pump on my brakes. Fortunately I knew enough about mechanics to challenge this BS line and the mechanic quickly abandoned his nonsense with great embarrassment. But what if I hadn’t known anything about auto mechanics?

I well remember times when money was very tight. So when an electrical problem presented itself and the electrician informed me it would cost a few hundred dollars, I chose to do the work myself for far less. But what if I had no idea about electrical wiring?

Once I was given a bid to build a small building (8 x24) on my premises. The bid was incredibly high in my view so I purchased the materials and built it myself for 10 cents on the dollar.

Years ago we hired a computer technician to come in and repair our computers. I sat with him, learned what he did, bought the software programs he used, and from that day forward we repaired our own computers.

Now all of this is to argue that there is a benefit to obtaining what I have called self-ability. That said, when I went to school, we had shop and home economic classes so it wasn’t unusual for my generation to become jack of all trades and master of none. Today, there is no such thing as classes teaching basic trade skills in our public education system. So again, is it reasonable to expect young people today to possess self-ability skills?

Ravinder and I have raised two boys. They have been exposed to everything from basic farming and animal husbandry skills to carpentry and auto mechanics. They are both computer engineers today and at least prepared to know BS from fact in most areas we think of as trade skills. Still, self-ability, self-reliance, is not important to either. Everyone is a specialist so leave it to the specialist.

Recently Ravinder criticized me for advocating for my own health care. She thinks I influence the physicians more than I should with my own self-diagnosis and treatment protocol. Her words went like this, “You intimidate them and that’s going too far.” Perhaps she’s right—I do believe however, as Ravinder does as well, that even in this area we need to be well informed and willing to discuss, and even challenge our health care professionals, in order to insure that we are receiving the best treatment. But again, is this over-the-top self-reliance?

How much self-reliance is actually in our own best interest? We live in a modern age where we depend on each other for everything from our daily transportation needs to our health care. Is it possible to get in our own way? When is it self-reliance and when is it an arrogant refusal to listen to an expert? How can you know the difference?

In my mind, our world is rapidly becoming one of disposable this and that, specialist expert reliance, let someone else do it, and so forth. I’m not sure this is progress. Society itself was born out of cooperation and specialization. I don’t think any of us want to go back to the days of doing everything ourselves. The real question then becomes one of what is the correct balance? Where is the middle path between self-reliance and societal trust and cooperation? What are your thoughts?

Thanks for the read and as always, I welcome your feedback.