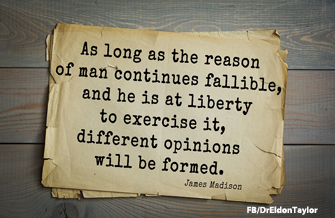 In this week’s spotlight I would like to once again remind you of the importance of both recognizing and accepting the inherent nature of our human fallibility when it comes to interpreting so-called facts and forming our opinions and beliefs.

I have written books that cover the many ways in which we find ourselves manipulated by biases, contexts, framing, influence, defense mechanisms, compliance principles, and so forth. Indeed, my NY Times Bestseller, Choices and Illusions, illustrates this influence from our chicken yard teachings to the sophisticated deployment of technology designed to influence and shape our beliefs—all for the purpose of selling us a product, a platform, a politician, and more.

Today I wish to remind you that so-called facts do not necessarily add up to the conclusions we often form. Sound bytes are not always true even if they are argued from facts. One of the best illustrations I have ever encountered of this comes from a bias known as the Texas Sharpshooter Fallacy. Think of it this way, if someone was paid to shoot the side of a barn full of holes, and then someone else drew a circle around the holes closest together, we might begin to think that the person who shot those holes was a real sharpshooter. The point of this is illustrated by David McRaney in his must read book, You are Not so Smart.

McRaney’s illustration goes this way:
Abraham Lincoln and John F. Kennedy were both presidents of the United States, elected one hundred years apart. Both were shot and killed by assassins who were known by three names with fifteen letters, John Wilkes Booth and Lee Harvey Oswald, and neither killer would make it to trial. Spooky, huh? It gets better. Kennedy had a secretary named Lincoln. They both were killed on a Friday while sitting next to their wives, Lincoln in the Ford Theater, Kennedy in a Lincoln made by Ford. Both men were succeeded by a man named Johnson—Andrew for Lincoln and Lyndon for Kennedy. Andrew was born in 1808, Lyndon in 1908. What are the odds?

We often add up facts and draw conclusions. The conclusions may not be valid because we fail to consider all the facts, especially those that may not support our confirmation bias. If, for example, you are inclined to believe that there is no such thing as coincidence, then the Lincoln/Kennedy matter is more compelling to you than to someone not so inclined. If you take the Kennedy/Lincoln matter as a whole, you learn that there are more differences in their story than similarities and the entire matter becomes nothing more than the analogy of our Texas Sharpshooter.

Now the Texas Sharpshooter Fallacy is but one of the 48 or more shortcuts or fallacies that we are all subject to. So, my advice, consider so-called facts in light of the agenda from which they are advanced. Look for the information omitted. Remember, we all have biases, are prone to certain mental shortcuts or heuristics, and can often jump to conclusions that betray honest intelligence.

My thoughts anyway—I welcome yours.